This exam tests the knowledge of a network security engineer to configure and implement security on Cisco networks perimeter edge devices such as a Cisco switch, Cisco router, and the Cisco ASA firewall.

This exam focuses on the technologies used to strengthen the security of a network perimeter such as Network Address Translation (NAT), ASA policy and application inspect, and a zone-based firewall on Cisco routers.

QUESTION 1
Drag and drop the function on the left onto the matching packet capture configuration types on th right. Not all options
are used.
Select and Place:

QUESTION 4
Which device can be managed by the Cisco Prime Security Manager?
A. ASA CX
B. ISR G2
C. Nexus
D. UCM
Correct Answer: A
https://www.cisco.com/c/en/us/td/docs/security/asacx/9-2/user/guide/b_User_Guide_for_ASA_CX_and_PRSM_9_2/prsm-ug-intro.html

QUESTION 5
Which FW mode which will keep high throughput and will make a fast and flexible deployment?
A. single mode, routed context
B. multimode, routed context
C. single mode, transparent context
D. multimode, transparent context
Correct Answer: D
Transparent mode – fast deployment (it doesn\\’t appear as hop in network).
Multimode – multiple contexts enable active/active failover – availability is increased because there can be two active
contexts (one ASA can be active for first context while the second ASA can be active for second context). 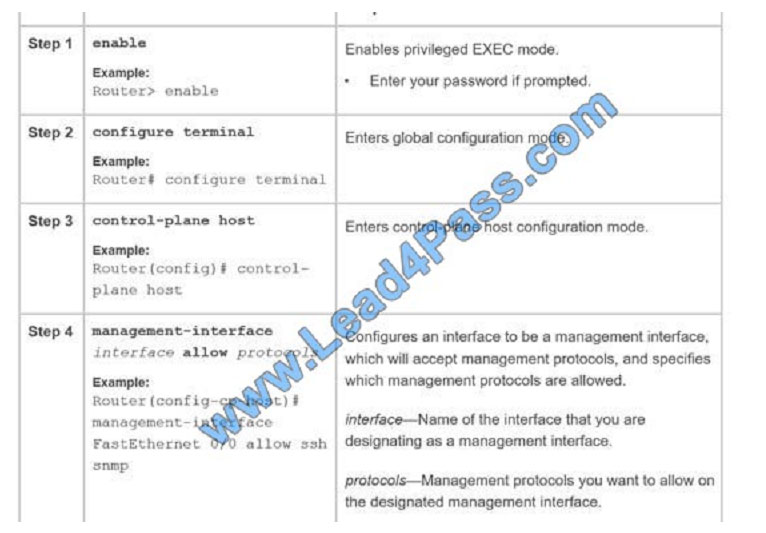 QUESTION 7
Which VTP mode supports private VLANs on a switch?
A. transparent
B. server
C. client
D. off
Correct Answer: A

QUESTION 9
What are mandatory policies needed to support IPSec VPN in CSM environment? (Choose two)
A. IKE Proposal
B. Group encryption
C. IPSec Proposal
D. GRE modes
E. Server load balance
Correct Answer: AC
Internet Key Exchange (IKE) is a key management protocol that is used to authenticate IPsec peers, negotiate and
distribute IPsec encryption keys, and to automatically establish IPsec security associations (SAs). The IKE negotiation
comprises two phases. Phase 1 negotiates a security association between two IKE peers, which enables the peers to
communicate securely in Phase 2. During Phase 2 negotiation, IKE establishes SAs for other applications, such as
IPsec.
Both phases use proposals when they negotiate a connection.
An IKE proposal is a set of algorithms that two peers use to secure the IKE negotiation between them.
IKE negotiation begins by each peer agreeing on a common (shared) IKE policy. This policy states which security
parameters will be used to protect subsequent IKE negotiations. For IKE version 1 (IKEv1), IKE proposals contain a
single set
of algorithms and a modulus group. You can create multiple, prioritized policies at each peer to ensure that at least one
policy matches a remote peer\\’s policy. Unlike IKEv1, in an IKEv2 proposal, you can select multiple algorithms and
modulus groups from which peers can choose during the Phase 1 negotiation, potentially making it possible to create a
single IKE proposal (although you might want different proposals to give higher priority to your most desired options).
You
can define several IKE proposals per VPN.
An IPsec proposal is used in Phase 2 of an IKE negotiation. The specific content of the proposal varies according to
topology type (site-to-site or remote access) and device type, although the proposals are broadly similar and contain
many of
the same elements, such as IPsec transform sets.

QUESTION 13
Refer to the exhibit. Which two are true statements about the expected port security behavior? (Choose two)

What are the advantages of Lead4pass?

Lead4pass employs the most authoritative exam specialists from Cisco, Cisco, CompTIA, IBM, EMC, etc. We update exam data throughout the year. Highest pass rate! We have a large user base. We are an industry leader! Choose Lead4Pass to pass the exam with ease!

It’s not easy to pass the Cisco 300-206 exam, but with accurate learning materials and proper practice, you can crack the exam with excellent results. Lead4pass provides you with the most relevant learning materials that you can use to help you prepare.